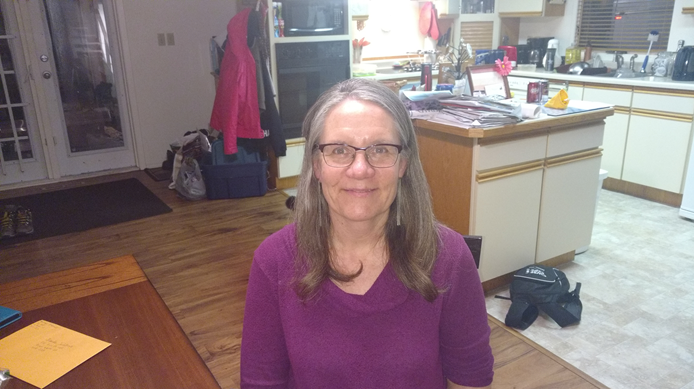 Simone Preikschat sits at her kitchen table, coffee in hand. Her hair rests softly on her shoulders, she is smiling slightly, and in the warm light she looks almost angelic.

Angelic is the perfect word to describe her. Preikschat is no stranger to helping others. She greets everyone she meets with a smile and tries her best to help everywhere she can. Her latest project? Volunteering at the Long Term Care in the La Ronge hospital.

Preikschat began volunteering at the Long Term Care a year and a half ago, when she moved to La Ronge from Uranium City. “I really love old people and I had a lot of time on my hands [when I first moved here],” she says. “It filled up some time and let me do something I love.”

Preikschat’s first experience working with elders happened when she was sixteen. There was a job posting at her high school saying that help was needed at a local nursing home. “I just wanted to work, I didn’t know what the job was about… [but] I ended up loving it and staying for four years.”

Although she never worked at a nursing home again after that, Preikschat continued to have a passion for working with old people. When she and her husband moved to Uranium City in 1995, she began to go out into the community and develop close friendships with many of the local elders. She visited with them, played cards with them, and did her best to make them feel valued.

Preikschat goes to the Long Term Care every Tuesday night and plays cribbage with one of the residents. She also participates in a monthly activity held at the Long Term Care and organized by the Lutheran Church, and attends special events such as craft nights.

So what motivates Simone Preikschat to continue volunteering with the elderly? Why does she believe that working with elders is important? When asked this question, she takes a deep breath and thinks for a few moments, her forehead wrinkled in concentration. Then she responds, “I’ve seen a lot of older people become invisible as they age… I know they still have the need for compassion and intimacy and friendship.” Preikschat has taken it upon herself to provide that friendship, trying to better as many lives as she can.